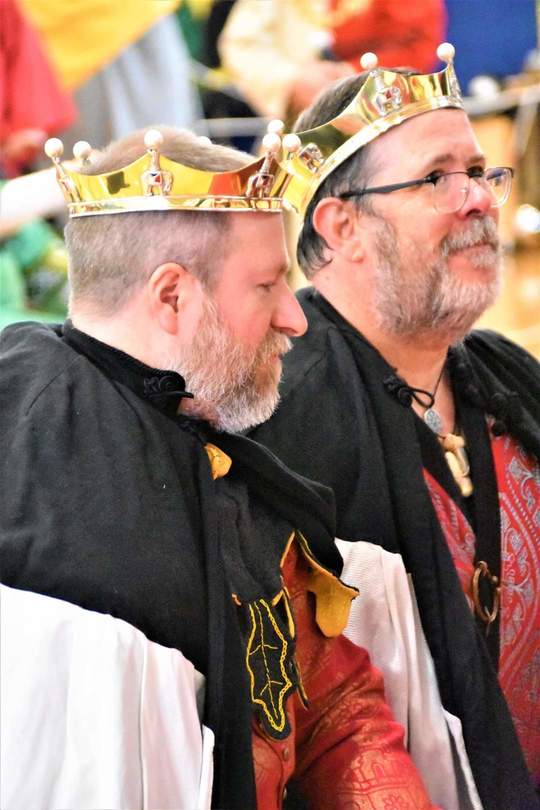 What is a Baron or Baroness?

Barons and Baronesses are officers of the Barony who are appointed by the Monarchs of the Middle Kingdom for a five-year term. As the Barons, Our responsibilities include:

Please feel free to email us with any questions, issues or suggestions.

We hope you find the following resources helpful:

To the Crown of the Midrealm

I here swear fealty and do homage

to the Crown of the Middle Kingdom:

To hold the Barony of Cynnabar in fief from the Crown,

to loyally uphold and enforce your laws in those lands

and give wise counsel to the Crown according to my knowledge and ability.

⋆
To the People of Cynnabar

Óláfr: This I shall do, and even more shall I promise: To support and encourage the arts martial, no matter their form, and all the noble arts and sciences practiced by those within our borders.

Malachy: This I will do, and even more shall I promise: To support and encourage the arts and sciences, no matter their form, and all the arts martial practiced by those within our borders.

Malachy: This we will do… Óláfr: and even more shall we promise:

Malachy: To support and encourage those who give service to the Barony, no matter the form...

Óláfr: And to recognize all of the hard work done by those within our borders.

About Óláfr and Malachy

Óláfr Ígulbjarnarson and Malachy von Ulm became the Territorial Barons of Cynnabar on November 2nd, 2019 (AS 54) at the Barony's Grand Day of Tournaments. They are Cynnabar's fifth couple to hold the Barony for the Crown of the Midrealm.

Óláfr is an enthusiastic cook, researcher, and feast steward, as well as an avid student of medieval gardening, medicine, and the Viking age. Before becoming Baron, he served as Minister of Arts and Sciences for the Barony. He was honored to be named to the Order of the Willow for his cooking, and is also a combat archery enthusiast.

Malachy is an armored fighter and musician. His other interests include tablet and card weaving, embroidery, and leading the Baronial Brewers Guild. Before becoming Baron and leading the Cynnabar Militia, he was named a Sergeant of the Red Company of the Middle Kingdom and served as Knight Martial for the Barony. He is also a member of the Order of the Willow for his musical skill with recorder.

The table below is a list of all of the events that Barons Malachy and Óláfr are expecting to attend. This list will be updated regularly.